The site of Leh Choskor (3800m asl) where the MAFIL works from 2017 to 2020 is located a few kilometers above Leh. A complete mapping of the archaeological area was carried out in 2015 and a first excavation campaign took place in 2016. It enabled to confirm that the main ruined building at the site was a Buddhist temple in use in the first half of the 11th century AD. Except for a few rock inscriptions, some stone reliefs and another ruined Buddhist monument (we are refering to the ruined stῡpa of Tirisa, Nubra, studied by the MAFIL in 2013), the mud brick temple of Leh Choskor is one the most ancien testimony of the presence of Buddhism in Ladakh. Its architecture and the remains unearthened within (fragments of painted clay sculptures, votive objects, etc…) are the first irrefutable material evidence of cultural links between Ladakh and the Western Tibetan kingdom (also refered to as the kingdoms of Guge-Purang) where the Later Spread of Buddhism (or byi dar in Tibetan literature) originated. Except for the ruined temples of Nyarma, that have never been excavated, these links were known only through late textual sources.

The forthcoming campaigns of the MAFIL (2018, 2019 and 2020) at the site of Leh Choskor, totaling about 140 structures spread over 24 hectares, aim at better understanding the process of implantation and diffusion of Buddhism into Ladakh and beyond in the Western Himalayas. A small number of structures was selected for excavation (three temples, two possible residential buildings and possible burials) : they should enable to identify when the site was founded, how long it was occupied and when its was abandoned. Further excavations at Leh Choskor will also contribute to various research themes, such as : the study of early Buddhist art (architecture, sculpture and painting) ; the study of Buddhist rituals ; the analysis of the socio-economic background of monastic communities or else the study of funerary practices. The excavations at Leh Choskor are part of a broader research project on early Buddhism in central Ladakh. Ruined temples and stūpas , stone scultpures and funerary sites in the Leh valley will be documented and studied in the frame of that project.

The field campaigns of MAFIL last one month, every year (usually in September). The international team is formed by archaeologists, engineers and students. 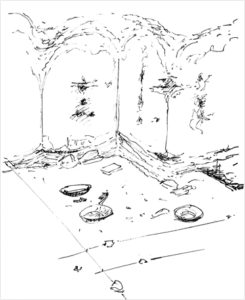