The western Himalayan region of Ladakh (state of Jammu and Kashmir) is the northernmost region of India. Bordered by Pakistan in the west (province of Gilgit-Baltistan) and China in the north and east (respectively by the autonomous regions of Xinjiang and Tibet), Ladakh presents an ideal geographical location to study the cultural interactions between the Indian subcontinent and Central Asia (we include the Tibetan plateau in the latter).

The four-year plan for 2013- 2016 focuses on the valley of Nubra (3000 m asl in average), the northernmost extension of Ladakh. The role of the Nubra as a gateway between northern India and Central Asia in modern times is well known. From the 17th century to the middle of the 20th century, the Nubra was the main road for trans-Karakoram trade between Leh and Yarkand (Tarim basin, actual Chinese region of Xinjiang). Except for Buddhist texts of the 15th century, the most ancient written source mentioning the Nubra dates from the middle of the 16th century, when the area was invaded by a Turco-Mongol general from Yarkand. Together with long distance trade, this invasion testifies that that the rugged and the high Saser and Karakoram passes (5334 and 5578m asl) are not a barrier between Ladakh and eastern Central Asia.

A preliminary survey by the ASI in 1992 and three extensive campaigns of surveys (in between 2006 and 2011) by L. Bruneau and M. Vernier revealed a wide variety of remains, both from a chronological and typological viewpoint, on a limited area (30km from north to south).

The four-year research project aims at apprehending the links between the north-west of the Indian subcontinent and Central Asia overtime in establishing a chrono-cultural sequence of the Nubra, from Neolithic to Medieval period.

The field campaigns of MAFIL last one month, every year (usually in September). The team is formed by a dozen of French, Indian and Ladakhi members that are archaeologists, engineers or students. 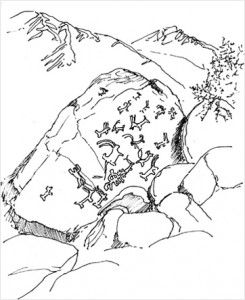